In a case outside the deli, healthy vegan meals to go. Pick what you like, open the fridge (there’s no attendant and there are no locks) and then take it inside to pay at the register. It’s the healthiest “street” food I’ve ever seen 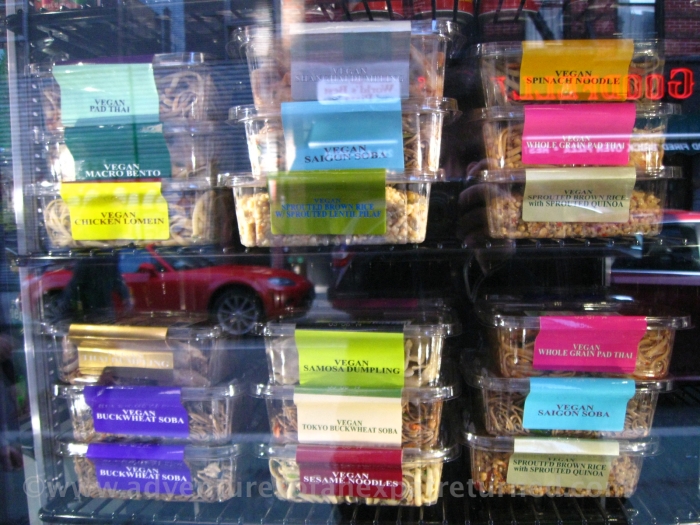 Once you’ve been lured inside by the prospect of an innocent, guilt-free meal, you’ll find yourself ambushed by the largest variety of chips (that’s crisps for my British friends out there) you’ve ever seen. Temptation! Get thee behind me!

From yellow to blue, from red to purple, from plain potato to sweet potato to corn and more, from salt-‘n’-vinegar to Sriracha and from mesquite to that horrible American imposter called “parmesan,” this aisle had more types, colors and flavors of chips than I’d ever dreamed could exist (not to mention pretzels, popcorn and cheese puffs galore).

Of course, New York City is full of such paradoxical delis. No East Coast city embraced organic food or the vegan movement as early or as whole-heartedly as NYC but, at the same time, ask any Midwesterner what they know about NY cuisine and the first thing that pops into their heads will be the famous New York pizza slice (which no Italian in their right mind would equate with pizza as they know it). Ask most Europeans, and pretty much all they’ll know about eating in New York will boil down to cheesecake and the dubious offerings of those iconic hot dog carts. Anyone who’s spent any amount of time in the Big Apple knows better. In New York you can find pretty much any kind of food imaginable: the very best… and the absolute worst.

For more on this same Lower East Side deli of infinite variety, you can check out my two previous posts about the incredible shelf of Spam and what might be Manhattan’s largest assortment of hot sauces.

Thanks for stopping by!

I think the contents of these two shelves are not so much inventory as they are arsenal. There’s enough hot sauce here to burn the last taste buds off of a vindaloo addict, to break the fifth alarm on the five-alarm-chili machine, to permanently disable the noses of an entire K9 unit. Looking more closely, I think we could probably find the proper hot sauce to fit any recipe in any ethnic cookbook you could buy in New York City, which is where I found this shelf. Indeed, it is right next door to the shocking-variety-of-Spam shelf you might have seen featured here a couple of days ago.

Not enough spice in your life? Sriracha, Tabasco, Red Devil, Cholula, Chili Sauce… this deli has got it all

Making a quick calculation and figuring that the bottles go back about 3 deep, I estimate there are a minimum of 18 varieties of hot sauce on these two shelves, for a total of approximately 54 bottles. I do believe that such a stock would keep my family happy for at least, say, 3 or 4 generations. That is, if no one accidentally knocked down the shelving in the interim. That might result in the destruction of the world as we know it – which, come to think of it, we might survive. After all, we would have the Spam shelf.

Does that photo look really good to you? If you’re into the heat, then check out these links:

And if you survive all that, we’ll see you next time.

Thanks for dropping by!