On the left: a bounty of apples, on sale at the Apple Castle, in New Wilmington, Pennsylvania. On the right: Mom’s apple pie, made with Apple Castle’s Cameo variety

As American as apple pie, right? That’s how the saying goes. Well, while visiting my grandmother in a very rural part of Pennsylvania last weekend (we’re talking Amish country), my mom and I decided to stop at a store called the Apple Castle, which we have been visiting since I should have been too small to remember it… but I think that wonderful blend of smells that seems unique to it – of cinnamon, cider, honey, maple and butterscotch, doughnuts and beeswax – must have made an impression on me even when I was too young to be aware of very much else, and since then, all my life, and especially when I was growing up in Europe as a kid, those smells have always been associated with those very special annual visits to grandparents’ houses, with magical trips to a land of horse-drawn buggies, red barns, green cornfields and backyards big enough to run in, full of fireflies at dusk. And nowhere but outside of little New Wilmington, Pennsylvania, have I ever found its like. On the right: Driving through the countryside, we had seen transparent apples advertised on more than one farm driveway. The lady at the Castle told us they are an apple that is ideal for recipes where you would want the cooked apple to be “saucy,” as opposed to holding its shape, as you’d want it to do for a project like pie. On the left: And we came away with all of those delicious things, with the exception of the cider.

It is corn season, and there are few things as American as corn-on-the-cob, boiled and served with salt and butter. This is what the “sugar and butter” variety of sweetcorn we bought at the Apple Castle looked like once we got it served up for dinner. Tender and sweet, it more than lived up to its name.

I wear my serious investigative-journalist face as I sample a maple doughnut. Other varieties, made fresh daily, included cinnamon, cider, honey-wheat, and, of course, the classics like chocolate-glazed and vanilla. We sampled some in-store, then took some more samples home for further study.

Honeybears! Watch out for local wildlife

Snow White wouldn’t have stood a chance in here. 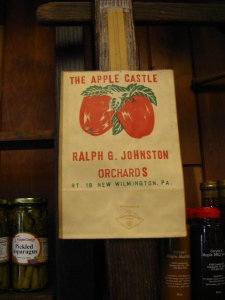 Original Apple Castle shopping bag, on display in the store

While visiting my grandmother, Dorothy, I had the good fortune to meet Ralph Johnston, original owner of the Apple Castle. He was pleased to spend some time with me, telling me some interesting and little-known facts about his store. It’s been 60 years, more or less, since he founded the store, which is still family-owned (their orchards have been there much longer – 150 years in 2011, to be exact), but his eyes are bright and his expression lively. He is still a tall man, but he must have towered as high as some of his fruit trees in his youth, and his big hands look like they could each hold four apples at once and never risk dropping a single one. Today, the orchards he once tended, across the road from the shop he built, produce not only apples in countless varieties, but peaches, and nectarines too, and many other fruits as well. It seems there’s always something in season, freshly harvested, overflowing the display tables at the Apple Castle. And now for a few of those little-known facts, courtesy of Ralph Johnston.

The natural stone facing on the front of the store was quarried from Mr. Johnston’s wife’s family farm, in nearby Beavertown, Pennsylvania.

Here you can see the shelves, which hold all manner of marvelous jars I could browse through for hours – wonderful jams (some of my personal favorites are the elderberry, the strawberry-rhubarb and the just-plain rhubarb and the “bluegoose” – a mixture of blueberry and gooseberry preserves), homemade apple butter, dark brown with cinnamon and spice, as well as jars of all manner of preserves, from jalapeño-pickled hard-boiled eggs to beets almost too bright a fuchsia to be believed, knowing that everything in those jars is natural. Behind the jars you can see the lovely, golden-brown wood paneling that covers the entire interior of the store. That paneling is made from walnut, cut in Mr. Johnston and his wife’s own woods. Now, take a closer look at the uprights that support the shelves themselves, and you’ll see that they are actually ladders used for fruit-harvesting, which have been cut in half to fit between floor and ceiling. And, of course, you can’t help but notice all those blue-ribbon prizes the Apple Castle has won over the years, strung across the top of the shelving and running nearly from wall to wall.

After he had finished telling me all these things, Mr. Johnston asked if I was interested in antiques, to be so curious about all these architectural details of his shop.

“No,” I replied, shaking his hand and thanking him for his time, “not antiques. It’s history that I love.”

It was a long drive home from Pennsylvania to Virginia, a good nine hours through the Allegheny mountains, on a road that took us from through West Virginia and Maryland before it got us back to Old Dominion (for my foreign readers, that’s Virginia’s nickname). The fact that we had all those wonderful bags full of Apple Castle goodness in the back seat made it seem even longer!

The very next day, my mom got down to the very serious business of making one of her famously delicious apple pies. On the top left, my mom’s pie waits to go into the oven, on the top right, it’s freshly taken out. In the middle, the excess pie crust is rolled up and filled with cinnamon sugar, to be had as a treat with a cup of tea while waiting for the main project to bake. On the bottom right, our dog Georgie has fallen asleep next to his bowl, worn out from all the waiting and hoping that he’ll get some, too. And, of course, the biggest picture is the finished product, served with some vanilla ice-cream on the side, a few hours later.

So, getting back to the title of this post, why do we always say that something is, “As American as apple pie?”

Well, the point is that a dessert quite like this one doesn’t exist anywhere else. The Germans are famous for their pastries and cakes, and I’ll doff my hat to a lovely German apfelkuchen any day, but it looks and tastes quite different from an American apple pie. Indeed, while living in Germany, my mother and father once invited a German couple who were friends of theirs over for tea. Upon entering the dining room and seeing the pie my mother had made sitting on the table, the German husband began laughing.

“What’s so funny?” my mother asked, a little taken aback, as you can imagine.

“Why, it’s just like the one that Minnie Mouse always made for Mickey!” he exclaimed. Yes, that was the only place he had ever seen such a thing.

I had the same experience years later, in Milan, when I served up the pie I had made to finish off a full American Thanksgiving dinner I had made for a small group of Italian friends.

“But…” said one, pointing incredulously at the dish I was carrying to the table, “that’s just like the ones that always get stolen off of the windowsill in cartoons!”

Well, I can tell you all, my mom’s apple pie is definitely good enough to tempt the most honest squirrels into a little kitchen-windowsill burglary. And those Cameo apples from the Apple Castle made it one of the most special we’ve ever had.

Until next time… here’s wishing you all some wonderful adventures of your own.

p.s. For those of you who’d like to know more about the Apple Castle or think that you might get out to visit, here’s the link to their website, in case you didn’t catch it at the top:

One thought on “As American as Apple Pie, Indeed”